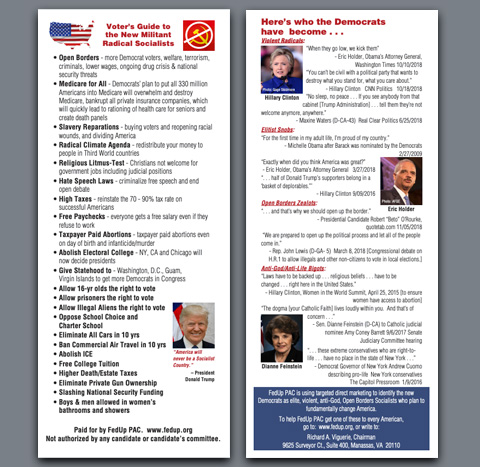 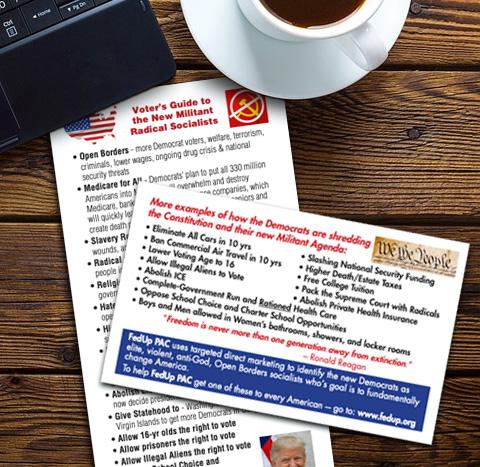 Branding the 2020 Democrat candidates as dangerous, unhinged militant socialists is a strong and effective way to take advantage of a golden opportunity for conservatives to keep the Presidency, increase our majority in the U.S. Senate and win back control of the House of Representatives next year.

And FedUp PAC is the only conservative group providing leadership with a strategy to use targeted marketing to peel away enough disaffected Democrat voters to make this opportunity happen.

Our new 8 x 3 ½ BRANDING CARD, the "Voter's Guide to the New Militant Radical Socialists," is just one major project we want to get into the hands of millions of voting Americans to brand democrats on a national level.

Key to our plan to expose the new Democrats, will be to distribute this branding card to key conservative leaders, politicians, radio and TV hosts, bloggers, pod-casters and other conservative journalists, like Rush Limbaugh, Sean Hannity, and Laura Ingraham to name a few.

Our goal is to distribute these cards to some 35 million voters.

It's Up to Conservatives to Save the Country

It's up to conservatives, we need to go beyond the choir (our established supporters) and educate tens of millions of low information people about Democrats and the evils of socialism using direct mail, social media, TV, radio, videos, newsletters and other alternative media.

And that's exactly what FedUp PAC will do!

Conservatives must undertake the task of BRANDING Democrats as dangerous, violent-prone, far-Left, anti-God socialists. I say conservatives because establishment RINO Republicans are not capable of doing this.

That's why the FedUp plan starts with nationalizing the 2020 presidential campaign as a choice between President Trump and a long list of radical Democrats advocating open borders, government-run health care, the insane $93 trillion Green New Deal and 90% tax rates.

Next, we aim to create branding cards to match those issues with the appropriate voter groups. For instance, a government takeover of health care resonates with voters age 65 and above. Over the last 30 years, approximately 60 percent of seniors have voted Republican. By focusing our message on the potential disaster of, say, candidate Bernie Sanders' Medicare for All plan, FedUp PAC should be able to peel away around 5 percent of seniors still voting Democrat.

This is our golden opportunity

By moving the needle 5% to 8% in just a few of these constituencies, conservatives will have perhaps the best opportunity ever to reelect a conservative President, add more conservatives in the U.S. Senate (and protect conservative incumbents up for reelection in 2020) and take back control of the House of Representatives from radical extremist House Speaker Nancy Pelosi (D-CA-12), Senator Chuck Schumer (D-NY), Representative Alexandria Ocasio-Cortez (D-NY-14), and Representative Ilhan Omar (D-MN-5).

No other conservative political committee is using direct marketing to brand Democrat politicians as dangerous socialists in the way FedUp PAC aims to do in 2020.

Our BRANDING CARDS are a good first step, a useful tool that no other organization is producing and getting into the hands of voters before November 2020