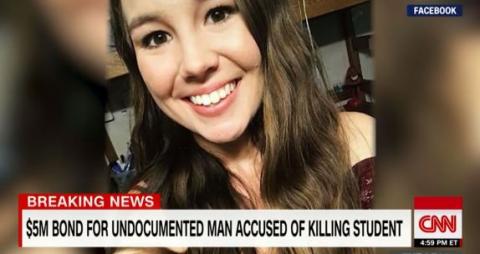 Newt Gingrich: "If Mollie Tibbetts is a household name, the Democrats are in deep trouble"

On August 21, police arrested an illegal immigrant for the murder of Mollie Tibbetts, a 20-year-old University of Iowa student, when she was jogging. He has confessed to stalking her and led the police to the location of her body. He has been residing illegally in the U.S. for four to seven years.

Mollie joins Kate Steinle, who died in 2015 on a San Francisco pier when an illegal alien fired the gun that killed her. She was walking with her father, and her last words to him were, "Help me, Dad." The illegal alien claimed it was all an accident and was acquitted last year of all murder and manslaughter charges. (This was the sanctuary city of San Francisco, after all.)

The reaction of Democrat leaders and the leftist mainstream media to Mollie Tibbetts' murder was to turn as quickly as possible to other, "more important stories"—such as President Trump and the separation of children from their parents while illegally entering the U.S. But what is a more cruel and permanent separation of children from their families than what happened to Mollie Tibbetts and Kate Steinle? Conservatives must keep this issue front and center. With the kind of effective border controls demanded by President Trump, there need be no more victims of illegal immigrants.

The Democrats and the leftist mainstream media say this is "politicizing" the murders. No—it is a call for policies that will protect American citizens. No more illegals = no more American victims of illegals. It's as simple as that.

Note: I am not saying—and you shouldn't imply—that all illegal aliens are criminals. Far from it. But the illegals should not be here, and with proper border controls and immigration policies, they won't be. Then there will be no more American victims at the hands of the criminals among them.