Gingrich: To Win, Republicans Must Nationalize the Election 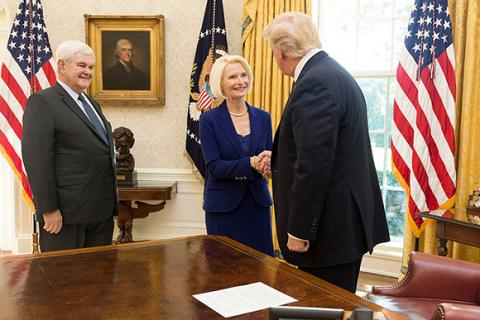 Newt Gingrich was the architect of the Republicans' "Contract with America," which led the GOP to victory in 1994—the first time in more than 40 years that the party won a majority in the House of Representatives. That Contract nationalized the election. It presented the Republican position on national issues that were important to voters, and gave those voters a reason to vote Republican.

Gingrich and other Republican leaders agree with me that we must now nationalize this 2018 midterm election if we are to win it. Gingrich has been circulating a detailed memo, "The Republican Choice for 2018: Win or Lose." In it he states that "the 2018 election is a Big Choice Election between two alternative universes," and the Democrats' positions "are so indefensible to the average American" that an aggressive Republican effort on these issues "would push the Democrats into a catastrophic defeat that is beyond the current system's imagination."

"The challenge for Republicans in 2018 is recognizing the potential for a Big Choice Election –between two alternative universes – that could be every bit as consequential as the 2016 election."

But to win such a victory,

"Republicans must move from district-by-district attrition to a national message."

Gingrich then presents some of the themes that constitute the Big Choices of 2018:

These are the kind of themes and issues I am stressing on FedUp.org.  Every week I will be adding more memos on issues that will bring us to victory. Read them here.

A lead story in the Washington Times last week noted how pollster John McLaughlin tested a version of a national agenda for the GOP, with excellent results among Republicans and Independents who said they would be more likely to vote for Republicans who embraced that agenda.

The article also noted that Democrat leaders are promoting their own national agenda, but it deceptively omits the issues that would disturb ordinary Americans the most—like free college and abolishing ICE.

This is why we must expose the real issues that Democrats will promote if they win control of the House or Senate.

The Washington Times article also mentioned this disturbing note: If the Republicans decide to write a new Contract with America, "it could take a few weeks for something to jell."

My fellow conservatives, we do not have weeks to spare while the Republicans in D.C. get their act together. The election is less than two months away! We must take the initiative and make certain our local conservatives, GOP party organizations, and Republican candidates start nationalizing the election today.

Act as if victory depends on it. Because it does.

P.S. For an excellent example of how to present a Big Choice to the voters, I give you President Donald Trump at his campaign speech in Montana last week: