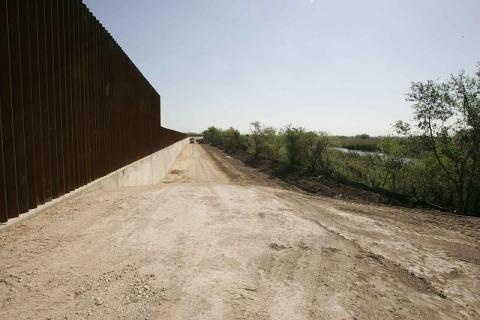 The Democrats’ reaction to President Trump’s stronger enforcement of the immigration laws leaves no doubt that the real Democratic goal is a totally open border.

And if Democrats win control of Congress in November, that could become a reality.

The cynical exploitation of the children brought in by illegal aliens was clearly intended to restore the “catch and release” policy of Obama.  With vastly increasing numbers of illegals bringing along children in order to take advantage of the old policy, those children have become a “get out of jail free” card.

But the radical Democrats want to go much further if they win this year’s elections.

More and more Democrats are lining up in favor of abolishing or defunding ICE (Immigration and Custom Enforcement), the agency whose job is to find the illegals and bring them in for deportation.  The recent increase in raids aimed at employers who have hired large numbers of illegal aliens was denounced by one of the Democrats’ top House challengers, Jennifer Wexton, as “fear-mongering.”  Apparently she thinks it’s a bad thing if lawbreakers are afraid of getting caught and punished as the law requires.

Democrats give lip service to securing the southern border, but their more specific statements show that to be a lie.  They especially oppose building the wall advocated by President Trump.  Rep. Joseph Kennedy even pledged, during the Democratic reply to the State of the Union, “Build a wall, and my generation will tear it down.”  They also oppose broader use of E-verify to identify and catch illegals who make it past the border.

Even more notorious are the “sanctuary cities” (and now also “sanctuary states”) created by many Democrats, dedicated to the protection of illegal aliens.  The best-known example of this policy occurred when San Francisco prevented ICE from taking into custody and deporting an illegal who then went on to kill Kate Steinle.  A California sheriff recently talked with President Trump about how California has tied her hands when it comes to getting criminals in the MS-13 gang turned over for deportation.

Democrats even want to encourage those who are considering illegal entry into the US by offering them more generous welfare benefits.  At a time when Americans are struggling to pay the rapidly increasing costs of ObamaCare, Democrats are pushing an even more expensive “single payer” system that would include illegal aliens.  Given the low-income status of most illegals, the taxpayer would have to foot the bill for them.

And Democrats’ don’t want these lawbreakers to remain illegal.  The 2016 Democratic platform came out squarely in favor of amnesty and citizenship for almost all illegal aliens.

American voters should be concerned that Democrats want to open the border to illegal aliens who will add to their tax burden, threaten their safety, and take their jobs.

But will they hear this from the news media, whose main concern is a 24-hour a day propaganda campaign intended to drive President Trump from office?

Democrats believe that their allies in the media will help create a “blue wave” that will sweep Democrats back into control of Congress this fall.  Then they can block everything Trump tries to do while proceeding with impeachment.  It could happen just that way unless President Trump’s supporters do something.

That is one of FedUp PAC’s major goals for 2018.  We must give President Trump a congressional majority that will empower him for the remaining two years of his first term.

FedUp PAC is determined to make sure that voters, especially key swing voters, know how much they have to lose if Democrats are back in control of the Congress next year.

That is why your donation of $25, $100, $500 or more to FedUp PAC is needed today – because with polls showing what could be an across-the-board Democratic triumph, even in deep-red states, there is not a day to waste.