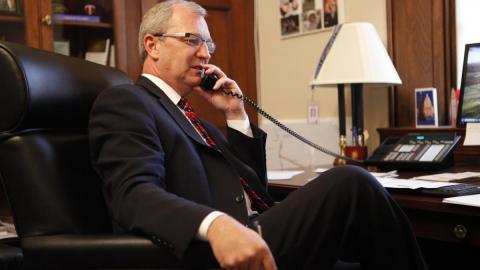 If President Trump is to enjoy a productive conclusion to his first term, he must have a GOP-controlled Senate with a large enough Republican majority that one or two Republican defections will no longer give Democrats a working majority in the Senate.  This is especially vital when it comes to the nomination of judges and executive branch appointees.  The difficulty in lining up a majority for Judge Brett Kavanaugh, caused by a few holdouts in the razor-thin GOP majority, demonstrates what a problem this can be.

A critical race in determining whether Republicans will expand their Senate majority is taking place in North Dakota, where Rep. Ken Cramer is taking on Sen. Heidi Heitkamp.  Although Heitkamp does her best to appear as a moderate, her voting record shows that she most often stands with the liberal Democrats in the Senate.

Sen. Heitkamp voted against Trump by opposing the tax cuts, opposing the repeal of ObamaCare, opposing building a wall along the Mexican border, and supporting the “bipartisan” immigration bill.  She refused to support four of Trump’s cabinet appointments, and voted to keep the filibuster for Supreme Court nominees (which would have blocked the confirmation of Neil Gorsuch).

She has also voted against Federal penalties for sanctuary cities, and admits that she opposes the deportation of most illegal aliens.

If any further proof is needed of Heitkamp’s liberalism, it can be found in the fact that she is being supported by Hillary Clinton’s super PAC.

As a member of the House, Rep. Ken Cramer has already proved that he will add a consistent vote in favor of Trump’s policies if promoted to the Senate.  He has voted for the tax cut, for the repeal of ObamaCare, for the border wall, and against sanctuary cities.  Cramer is a reliable vote for the Second Amendment, for rolling back overregulation, and for the pro-life cause.

With polls showing the race a dead heat, there is no doubt that North Dakota is among the top possibilities for adding not just another Republican, but a senator who will put his vote behind the Trump agenda.

FedUp PAC’s goal for 2018 is to maintain and expand the GOP majorities in Congress to support President Trump and his conservative-populist agenda.

FedUp PAC wants to make sure that voters, especially in key states such as North Dakota, know what it means for them if Democrats are back in control of the Congress next year.

We can do it again in 2018.  We can make sure voters know why they must keep Republicans in control of the Congress and add to the Senate majority by electing candidates such as Ken Cramer.