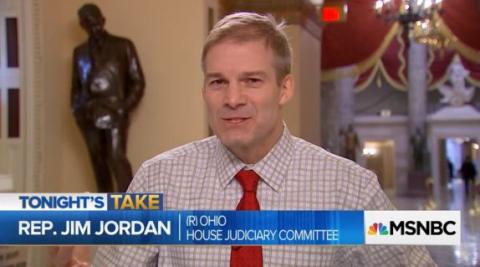 Conservatives are hoping Rep. Jim Jordan (R-OH) will decide to challenge Rep. Kevin McCarthy (R-CA) for speaker, according to a poll by FedUp PAC.

Showing near-unanimty, almost 99% agree that Jordan would be more likely to successfully move President Trump’s conservative-populist agenda through the House.  Less than one-half of one percent believe McCarthy would do a better job.

Jordan is a member of the conservative Freedom Caucus and has been a leader in the fight to cut spending, protect the Second Amendment, repeal ObamaCare, and deport illegal aliens.  McCarthy is closely tied to the Washington GOP establishment and would be expected to follow Ryan’s policy of distancing himself from Trump and the conservative agenda.  His previous attempt to become speaker collapsed for lack of conservative support.

The contrast between Jordan and McCarthy was easily seen when Congress passed its most recent spending bill.  McCarthy was a strong supporter of the $1.3 trillion bill which eliminated the budget caps adopted in 2011, funded many Democratic priorities, and was supported by a majority of House Democrats.  Jordan opposed the bill, and Trump threatened to veto it until he decided that the need for more military spending justified his very reluctant signature.

The choice of a new speaker will be made after November’s elections (unless Ryan steps down earlier), and many of the more liberal members of the House Republican Caucus are retiring or in danger of defeat, increasing conservative influence.

FedUp PaC is working to elect more conservatives, which will improve the chances of conservative leadership for the House in 2019.

The Election of a New Speaker Begins with May GOP Primaries