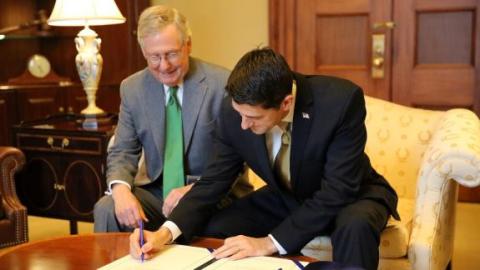 Republicans leaders in Congress, by postponing a Congressional decision on how to handle Obama’s unconstitutional Deferred Action for Childhood Arrivals (DACA) amnesty, have given Democrats leverage and made it likely that Republicans will, once again, surrender on the amnesty issue.

Obama, as president, had a constitutional responsibility to see “that the Laws be faithfully executed” (Article II, Section 3), including the laws relating to illegal aliens.  President Trump quite properly announced that he would put an end to this unconstitutional executive action and called upon Congress to decide if it wanted to make an exception in the law for those brought here as children.

Some Congressional Republicans have worked on a bill that would seriously improve the government’s ability to do something about the millions of illegal aliens already here, increasing the ability to deport them and making it more difficult for them to get jobs, in return for allowing the DACA illegals to stay but not become citizens.  Many conservatives doubt whether such a concession on DACA can be justified for any reason, but at least such a deal would help President Trump to carry out his campaign promise to send most of the illegals home.

However, the Republican leadership has made no effort pass such a bill, instead saying they will try to get around to it next year.

That opened the way for the Washington establishment, working hand-in-glove with Democratic leaders Nancy Pelosi and Charles Schumer, to grab the upper hand by insisting that a DACA-style amnesty with no citizenship restrictions and no enforcement concessions be included in the end-of-year spending bill.  If amnesty is not included, Democrats will defeat the spending bill, shut down the government, and work with their friends in the news media to blame the Republicans.

This was no surprise to Paul Ryan and Mitch McConnell.  It’s exactly what the Democrats have done previously to get their priorities passed by a Republican Congress. What’s more, they boasted in advance that this was what they would do.

Ryan and McConnell could have brought a compromise bill to the floor for a vote, forcing the Democrats to vote against it and showing that Republicans were willing to make a deal.  Instead, they sat on their hands and made the establishment strategy work.

Two months ago, FedUp PAC members said in a poll that Paul Ryan could not be trusted to handle the DACA issue, and that he would allow Pelosi and Schumer to call the shots.  Our members were right.

Now Republicans in Congress must call the Democrats’ bluff.  Let the Democrats shut down much of the government.  Tell the American public that the Democrats care more about illegal aliens than the need for a functioning Federal government.  And let the Washington establishment see how it likes having its government subsidies suspended during the shutdown.

It’s time to play hardball.  Ryan and McConnell don’t want to do it, so it’s time for conservative leaders in Congress to rise to the occasion.

If such leadership does not emerge, the Republicans (with Ryan and McConnell at the head of the line) will once again surrender to the Democrats.

And if Republicans once again let the Democrats run Congress, will conservatives turn out to vote in 2018?